The History Guy: War and Conflicts News
A Resource on History, Military History, Politics, and Biography
Browse: Home   /   General Patton Quote on Making the Other Poor Dumb Bastard Die For His Country 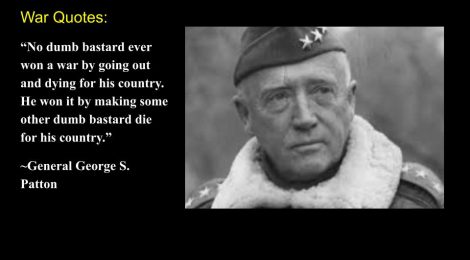 General George S. Patton Quote on “Making the Other Poor Dumb Bastard Die For His Country” General George S. Patton Quote on Making the Other Poor Dumb Bastard Die For His Country

General George Patton was one of the most controversial, arrogant, and successful generals in American military history. Perhaps his most famous quote, delivered to troops during World War Two, is remembered by those troops as words to the effect of:

This particular version of Patton’s admonition to his men that the point of fighting was not to die for your country (which was, and is still, a popular if rather dumb pro-war line that people-usually not veterans or actual troops-use), but to make the enemy soldier die for his country.

No recording of Patton making his speech is known to exist, nor was it ever published in any American newspapers. The use of the word “bastard," was not something that could be published by the American news media back then. Multiple accounts do exist, as found in memoirs written many years later by the very soldiers that Patton was speaking to. One of those soldiers was General John Gavin, who wrote the above quote in a book he wrote in 1958, citing General Patton as the speaker to American troops in North Africa in 1943. Other remembrances by veterans of World War Two recall Patton using the term “sons of bitches" in place of “bastard," and some have him using both terms, along with some other profane language, which Patton was well-known for using.

Most Americans recall this quote as spoken by actor George C. Scott, who portrayed the famous general in the 1970 movie Patton. Below is a clip from the opening scene of the Patton film, featuring our famous Patton quote.