Prior to the World War One and the Russian Revolution, the modern nations of Armenia and Azerbaijan were part of the Russian Empire. Russia had conquered this region, part of the larger Caucausus Region, in the late 1800s from Ottoman Turkey and the old Persian Empire (modern-day Iran).

Armenians are a primarily Christian ethnic group, while most Azerbaijanis are Sunni Muslim. With the chaos and violence of the Russian Revolution and Civil War (1917-1921), many parts of the old Russian Empire tried to break away from Moscow and establish independent nations. Both Armenia and Azerbaijan declared independence, but in several parts of their new nations, the two ethnic groups were mixed with each other. Many Armenians lived within the borders of the new Azerbaijan, and Armenia felt that those areas rightfully belonged to Armenia. The two fledgling nations fought their first war then, though in the end, the Russian returned (this time through the Bolshevik (communist) Red Army) and reestablished Moscow’s rule over the region.

Nearly 70 years later, the Soviet Union fell apart, and, just like in the aftermath of World War One and the Russian Revolution, many parts of the Soviet Union declared independence, including Armenia and Azerbaijan. Immediately, the two once again fought over their border, with Armenia seizing control of the Armenian-inhabited parts of Azerbaijan. The two nations continued to fight each other over the disputed region of Nagorno-Karabakh.

A confused and chaotic situation in the old Russian Caucasus region as Ottoman and British forces each tried to gain advantage as Georgia, Armenia, and Azerbaijan declared independence from Russia. Almost immediately, violence between Armenians and Azererbaijanis began with a battle in the Azeri city of Baku, where Ottomans and Azerbaijani forces killed thousands of Armenians (many of whom had allied themselves with a British force that had arrived earlier).

Fighting spread over the next two years to the border areas between the two new nations, as Armenians in the Azerbaijani regions of Nagorno-Karabakh and Nakhchivan fought the Azerbaijanis to join with Armenia. Much of this fighting was guerrilla style and resulted in many civilian casualties on both sides.

This war ended when the Russian Bolsevik Red Army invaded first Azerbaijan, and then Armenia to force them both to join the Soviet Union in 1920. Soviet Azerbaijan got the regions of Nagorno-Karabakh and Nakhchivan, while Soviet Armenia got Zangezur.

As the Soviet Union weakened in the late 1980s, ethnic violence broke out between Armenians and Azerbaijanis in the Nagorno-Karabakh region. Violence continued between the two ethnic groups, and Soviet military attempts to halt the fighting failed. The violence became so bad, that hundreds of thousands of Armenians and Azerbaijanis fled their homes in areas where they formed a minority.

During this time period, both Armenian and Azerbaijani militants began forming militia groups and an active independence movement gained strength in Azerbaijan, prompting the Soviet military to move into the Azeri capital of Baku in January, 1990, triggering a battle that claimed hundreds of lives. As the situation in the region became more chaotic and the decline of Soviet central authority became more evident, Armenian militant forces began attacking Azerbaijani villages in the disputed regions. In August, 1990, Soviet military forces, attempting to protect Azerbaijani towns, engaged in a battle with Armenian militants. The situation continued to deteriorate as Soviet authority waned and multiple Soviet regions openly talked about independence and Armenian-Azerbaijani fighting grew more intense, with Soviet forces trying and failing to stop the attacks.

In December, 1991, when the Soviet Union officially ended, the departing Soviet forces left behind large stores of weapons and ammunition behind in the region. In addition, many Soviet soldiers, prior to leaving and going home, sold their personal weapons and equipment they were in charge of to the highest bidder. Thus, the new nations of Armenia and Azerbaijani had large amounts of Soviet weaponry to fight their war.

As the Nagorno-Karabakh War now became a war between two independent nations, each side gained allies that supplied weapons and other aid. Turkey, Israel, and several Arab nations, while Armenia gained support from the newly independent Russian Republic. In addition, financial aid was sent to Armenia from the Armenian Diaspora around the world.

Armenian forces managed to maintain control of Nagorno-Karabakh, and in May, 1994, the two sides agreed to a cease-fire after six years of war.

Armenian–Azerbaijani Border Clashes (2014)-Fighting along the border continues and kills dozens of troops and some civilians on both sides. On November 12, 2014, the Azerbaijani armed forces shot down an Armenian (actually part of the Nagorno-Karabakh defense forces) helicopter.

Armenian–Azerbaijani Four-Day War (2016)-Heavy fighting between the two sides, resulting in nearly a hundred deaths and hundreds of wounded for each side, including destroyed tanks and helicopters. Azerbaijan had recently upgraded its military equipment with money from its profitable oil industry.

Escalated fighting on July 12, 2020 resulted in the death of an Azerbaijani general, among other soldiers on both sides. The fighting included the use of tanks, artillery, and military drones. Azerbaijan threatened to strike Armenia’s nuclear power plant (near the capital of Yerevan) with missiles. 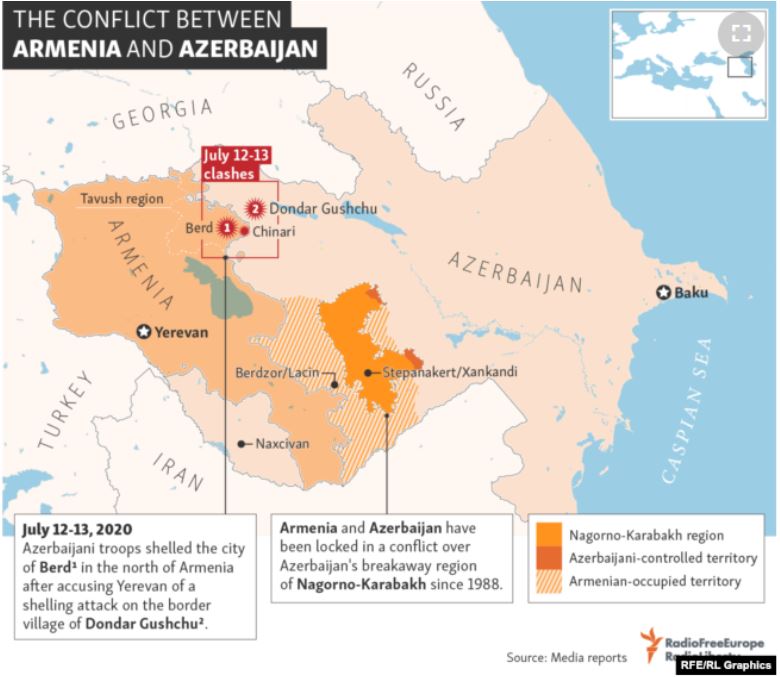 Turkey, which is already intervening in Syria and in Libya on the side of those wars opposite the side backed by Russia, offered to supply Azerbaijan with Turkish military weaponry. This is a potentially significant offer, as Armenia and Turkey are historical enemies, and they share a border. Armenia is backed by Russia, which has troops in Armenia at military bases that Armenia allows Russia to use. Armenia believes that Russia is their ultimate defender if a war with Azerbaijan (or Turkey) went the wrong way for Yerevan.

Sources on the Armenian-Azerbaijan Conflict: